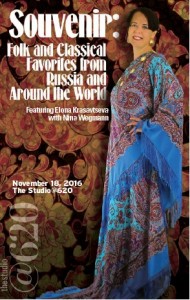 The [email protected] and Russian Heritage present an evening of traditional Russian folk songs, some of which are over 500 years old, sung by Elona Krasavtseva (lyrical soprano) accompanied by Nina Slyusar-Wegmann (accordion and piano). The program will include a range of song styles, including wedding songs, also called “crying songs”, because weddings in northern Russia were for many years considered a sad event, as it meant that young girls were sent far away from their homes and families. There will also be a lot of sunny, hilarious, cheerful Italian and Spanish music, spiced with American and English favorites too. You’ll be on a musical world tour so come enjoy these tonal souvenirs!

Elona Krasavtseva is an award winning singer and songwriter from Moscow, Russia.  In 2013 she was named a National Treasure of Russia for her songwriting and performance.  Elona performs in New York City and Los Angeles, as well as in Europe including Russia, Belarus and Kazakhstan. She runs a Music and Poetry Club in Florida.